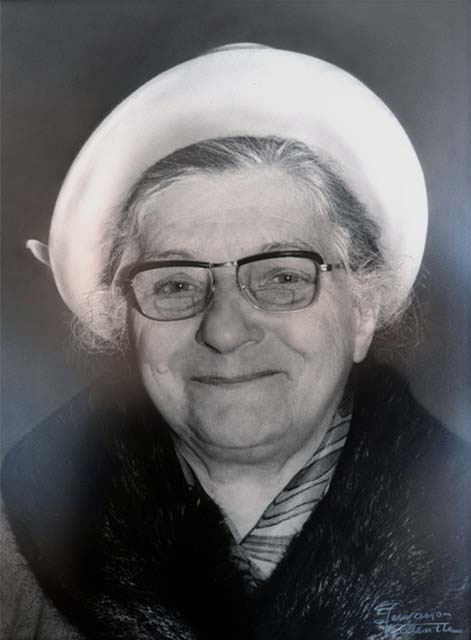 Marguerite got deep into winemaking culture at a very young age when she accompanied her father, elected president of Fleurie wine co-operative in 1932, to all the meetings he had to attend. It was self-evident to her to promise him she would take the helm at his death.

She succeeded him in 1946. With the war over, the co-operative movement was booming. Exceedingly competent, Marguerite worked on the development of the structure for which she had taken on the responsibility for nearly 40 years without ever letting up. The first and only woman to have ever presided a wine co-operative in France, her strong personality meant her ideas won through in a male-dominated profession.

Outspoken when she was sure she was on the right track, she was determined, persistent and pugnacious, especially when it came to defending Fleurie. She took the Cru’s name far and made it famous.

She was awarded the Légion d’Honneur in 1975, showing recognition and gratitude from her Beaujolais homeland. The whole viticultural world followed her funeral in sadness when she died in 1992.

After spending 3 years at catering college and 5 years in England, Chantal Chagny purchased Le Cep restaurant in Fleurie in 1968. Gérard Cortembert, whose talent as a chef she had singled out, joined her in the adventure a few years later.

In the 80s, after having been awarded 2 Michelin stars, cinema stars and politicians jostled to try out this restaurant in Fleurie. After Gérard died in 1990, Chantal decided to break away from the cult of stars. She kept one and concocted a cuisine centred around taking local produce to its apotheosis.

The New York Times sang her praises and she was admired by Périco Légasse. Her cellar was made up of some of the most prestigious Beaujolais wines.

Find out about Cru Fleurie history

Would you like to get in touch with Cru Fleurie?

You can get in touch with us by phone, email or by clicking on the contact
button on our internet site below and filling in the form.